All of the following sausages can be cooked a number of ways.

The most traditional method is to put them under a preheated grill (or the BBQ!) on a moderate heat and grill each side for approximately 10 minutes, until browned outside and cooked all the way through. You don’t want the grill too hot or the skin will burst and the outside of the bangers will burn, whilst the insides will remain dangerously raw!  Too low a heat or not long enough, and they’ll just be raw. Grilling also tends to make a mess, so line your grill pan with an easy to clean reusable silicone liner if you can.

Frying sausages in a pan is also a classic, and works very similarly to the grill method. Pre-heat a heavy frying pan or skillet on a medium heat, and cook for about 15 to 20 minutes, turning occasionally to ensure even cooking. Again, you want them browned all over, and cooked through. With hogs pudding you’ll get some fantastic tasty caramelisation if you skin them and cut them into slices about the same thickness as a pound coin.

Alternately sausages can be roasted in the oven, preheated to 200 degrees centigrade (185 centigrade in fan ovens, or gas mark 6) for 30 minutes. Give them a light rub with some oil, just enough to make sure they don’t stick, and put them evenly spaced out into a wide roasting dish, uncovered, and turn them halfway. Or there’s the French method where you preheat the oven to the same temperature then skin and place the bangers into a medium sized lidded casserole, with a little wine or sherry, pop the lid on, and leave them to braise for half an hour in the liquid. They don’t come out crispy, but they are incredibly juicy, and you don’t have to turn them as the lid ensures that they self-baste from the condensation.

Basically there are a lot of ways you can cook a sausage, and they go with almost anything. Make bangers and mash. Make toad in the hole. Have them with chips, or in a butty with brown sauce. Sausages are the most versatile thing there is! And here at Chypraze Farm we have a wide range of different varieties, all expertly made by hand by our master butchers. 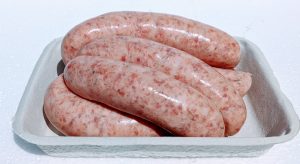 97% Pork Sausages
Chypraze pork sausages are the most basic sausage we make. They’re still pretty special though, we think. They’re made of 97% pure pork from our heritage outdoor grown Saddleback pigs, with 3% rusk by weight, and absolutely no added water! These are pork sausages as pork sausages should be made! Thick, meaty, and delicious. Each pack is approximately 600 grams in weight, and contains roughly 6 sausages. These go with absolutely anything!

97% Pork Chipolatas
Take our pork sausages and make them thinner and you get our pork chipolatas. It’s that simple! Just like the sausages they’re 97% pure pork meat from our Saddleback pigs, with 3% rusk by weight and no added water. Each pack is approximately 600 grams, and contains between 8 and 10 chipolatas. 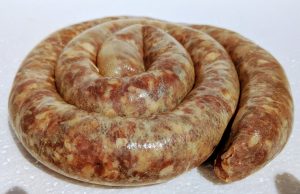 Toulouse Sausage
A traditional French sausage, the Toulouse comes in a single big ring, made of pure roughly chopped pork flavoured with garlic and red wine. The rough chopped meat and higher fat content, along with there being no rusk or added water at all, gives a Toulouse a uniquely meaty texture. At approximately 500-600 grams per sausage just one of these will feed two people (or one with a large appetite!). Toulouse particularly benefit from being grilled or roasted, as it allows the fat to render, and it’s superb with dauphinois or mashed potatoes!

Boerewors
Another big ring sausage, the Boerewors is also a traditional rustic farmhouse banger, though this time from South Africa. Pork and beef are mixed with Great Sellan Farm lamb and flavoured with coriander and cloves. There’s no rusk or added water, making for another very meaty texture that benefits from grilling or BBQing! And again, with each one weighing in at roughly 500-600 grams each, there’s enough for two people.

Italian sausages
Roughly chopped pork, black pepper and fennel go into our Italian sausages. No rusk. No added water. Another very meaty hit of flavour packed into a big ring sausage, though this time hailing from Italy!

Garlic & Thyme Sausages
These are similar to our pork sausages, but flavoured by adding garlic and thyme. 3% rusk by weight, with no added water, these are a particularly fragrant and herby sausage. Each packet contains roughly 6 sausages, and they can be used much as you would a pork sausage, but with a garlicky twist. 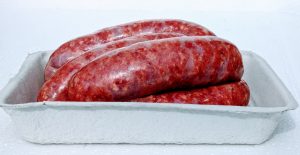 Beef & Tomato Sausages
Our ever popular beef and tomato sausages are made by using our pasture fed beef and mixing in tomato passata (a kind of unsweetened tomato sauce – it’s used as the base for a lot of tomato sauces and soups, and is a staple in Italy). They also contain 3% rusk by weight, with no added water, and each packet has approximately 6 sausages. The passata gives these a very vivid bright red colour before they’re cooked, which always makes for a crowd pleaser at our farmers market stalls!

Fresh Chorizo
Our fresh chorizo contains cured pork, bacon, and red chilli pepper for an exciting spicy heat! You can use these as you would any other sausage, or, cut them up and add them to soups and stews and other recipes to add a lovely punch of flavour. Because it is fresh chorizo rather than dried, you will need to be sure however to cook them all the way through before eating them! There are roughly 6 sausages per pack, and no added water.

Lamb Merguez
A sensational chipolata style sausage from Morocco, made from Great Sellan Farm hogget lamb packed with cumin and red chilli pepper spices (and, you guessed it, no added water), these are just magnificent when grilled. Not too hot, but definitely not bland, these will liven up any meal in place of a standard pork banger! They go very well in Toad in the Hole too. Traditionally eaten as part of Maghrebi cuisine, they can also be broken up and added to a tagine to add a meaty layer of flavour. Each pack has roughly 8 to 10 chipolatas inside. 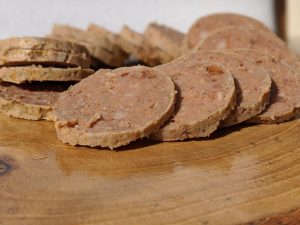 Hogs Pudding
The traditional hogs pudding is a West Country classic. You don’t really see these outside of Cornwall or parts of Devon, it’s a genuine home grown delight. Halfway between a sausage and a haggis, the hog’s pudding is a particularly thick set thing, each one being roughly the same weight as 3 standard pork sausages. A mixture of pork, offal, and suet flavoured with white pepper, black pepper, cumin, garlic and basil, then gently pre-cooked (though don’t think you can eat them cold without cooking them through again!), they’re a remarkably unctuous, meaty, flavourful thing. Uncharitable people sometimes equate them with a white pudding, but this is very unfair, as there’s nothing bland about a hogs pudding! They can be cooked whole, but they really sing when skinned and sliced into coins, then fried or oven roasted until dark brown and caramelised on both sides. You won’t need to add any oil or fat to the pan, either, as there’s plenty already within these beauties!  Normally eaten as part of a fried breakfast, they’re also great with Welsh rarebit and green chilli jam, or served with oven roasted celeriac or potato dauphinois!

This website uses cookies to improve your experience. To continue using this site, you are required by GDPR laws to agree to this, and should click the Accept button below.

If you do not agree, click Reject, and you will be redirected to the Startpage.com search engine.

Any cookies that may not be particularly necessary for the website to function and is used specifically to collect user personal data via analytics, ads, other embedded contents are termed as non-necessary cookies. It is mandatory to procure user consent prior to running these cookies on your website.